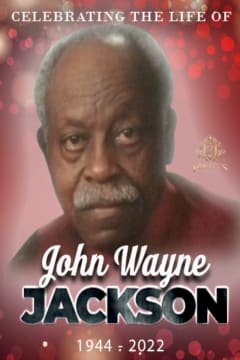 John Wayne Jackson (JJ) was the second child born to Levy Jackson on August 25, 1944 in Orange, Tx. John and his sister Julia were raised by their Aunt Viola Jackson Bellard. John went to St. Theresa’s Elementary and Middle School and then onto Wallace High School where he played football and sang in the choir. He graduated from Wallace high school in 1962 at the age of 17. After graduation he enlisted in the US Marine Corp and was a Marine for 5 years. Upon discharge from the Marines he went to Prairie View A&M University and obtained his Bachelor of Science and Masters in Social work. While attending Prairie View in January 1969 John met and later married the love of his life, Patricia Guillory in 1972. To this union a daughter was born, Chara. He also worked at the Post Office during this time. Upon graduation he relocated to Fort Hood, Texas and worked on the Army base for 25 years until his retirement.

John had a love for music and singing from a very young age. He was in the high school choir and played the piano and guitar. John was in a band in college. John accepted Christ as his Lord and Savior and went to Our Mother of Mercy and Word of Life Faith Temple under Pastor Lura Guillory for over 30 years. After retirement he became a member of the gospel group The Echoes from Heaven and they recorded an album. John was known for his kind and generous heart. He would help anyone in need. In 2011 the Jacksons joined Nation of God Ministries. John was in the Nation of God Church Choir and Men of Valor. 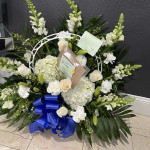