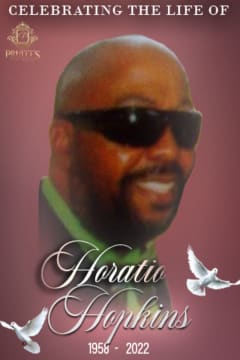 St John 9: 4 "I must work the works of Him that sent me, while it is day: the night cometh, when no man can work".

On May 28, 2022 our Lord and Savior Jesus Christ called His servant, Horatio Dean Hopkins, Home to Glory.

Horatio was the youngest boy of 10 children born to the lineage of Clifford Lee Hopkins, Sr. and Ivra Mae (Smith) Hopkins on September 1, 1958 in Dallas, Texas. His parents were natives of Centerville, Texas.

His Christian experience began early in his life. As a six-months premature baby, his mother prayed and asked God, “If it’s Your Will, please save my child.”

And so, his life story began.  As a child, his family recognized there was an anointing on Horatio’s life, as he was always calling on the Lord Jesus Christ, preaching into a soda bottle, to all of the neighborhood children, imitating the late Pastor S.E. Mitchell who was a great mentor to young Horatio.

At the age of six, in the year of 1964, his mother and her children became members of Greater Harvest Church Of God In Christ. There he shared a very special bond with the late L. V. (Reed) Smith, whereas she would seat him on the bench with her as she played the organ for church services. She referred to him as "Preacher" because she recognized the “gift” and “callings” that were on his life. He grew into the knowledge of God,  repented of his sins, and accepted Jesus Christ as his Lord and Savior; and he was filled with the Holy Ghost and spoke in tongues as the Spirit of God gave him utterance.

Horatio grew up in the southern sector of Dallas and attended the Dallas Independent School District.

As the Bible spoke of Peter and John being unlearned men, but full of the gifts from God and full of the Holy Ghost, in the same fashion at the age of 20 years, Horatio accepted his True Calling into the ministry as he attended Lighthouse Church of God in Christ. His first message was "Let there be..." and he consummated the acceptance of his calling as a minister preaching the Gospel, as did John the Baptist in the wilderness.

Horatio was faithful to God's Calling as he attended Lighthouse Church of God in Christ, Pastored by the late Edward Calloway. Lighthouse is where Horatio met a special young lady and entered into holy matrimony; however, years later and after dissolution of the marriage, he relocated to Houston, Texas which has been his resident for the past 30 years.

As Horatio continued his walk with God, he served as a role model for all of his nieces and nephews—speaking words of encouragement and taking them to various church services. Some of Horatio’s hobbies included singing and ministering through song, and playing musical instruments.

As he began the next phase of his exciting journey in Houston, he became a member of Williams Temple Church of God in Christ. Under the leadership of the late Bishop R.E. Woodard, he was ordained as an elder on June 22, 1994.  Horatio never wavered from his Faith, and he loved the Grand Old Church of God in Christ, as was founded by the late Bishop C. H. Mason. He possessed a compelling vision that he could lead and inspire others, as he served honorably as a Praise and Worshipper for his fellow Williams Temple C.O.G.I.C. congregation.

Horatio enjoyed a rewarding career as he was most recently employed in a part-time capacity with The Parking Spot; also retirement from Men's Wearhouse, and Nesbits Cleaners as a Supervisor.  Silk finishing and dry cleaning was Horatio’s specialty as he was mentored by his aunt Hattie who owned a dry cleaning business located in Dallas, TX. She taught him “the trade” by offering an example of moral leadership, values, ethics, and beliefs. Horatio developed a passion to keep going when times were rough. In addition, he possessed good judgment, exemplary client service, and the courage to make tough decisions while pursuing a successful career in various industries. 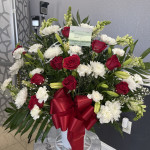 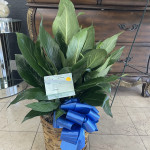 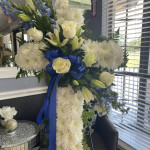